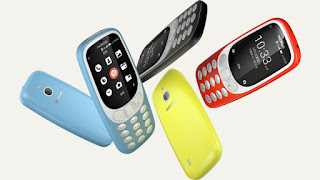 The Nokia 3310 4G variant finally launched by the HMD Global.The new variant of 3310 supports the Wi-Fi hotspot and this phone runs on the Yun OS. The launched phone is listed on a website of China. Before this launch, the 4G variant of Nokia 3310 was listed on the TENAA website.
The Nokia brand license holder Finland company launched the 2G and 3G variant of the Nokia 3310 too. The HMD Global made a partnership with the “China Mobiles” to avail this phone in China. It is not confirmed, when this phone will be available in the International market and the Nokia didn’t reveal any information about the availability and pricing in the international market.

The Nokia 3310 launched with a screen size of 2.4 Inches. The resolution of this display is 240×320 pixels, which remained same in this variant to like the 3G variant and 2G Variant. The new Nokia 3310 4G comes with an internal space of 512 MB, which can be expanded up to 64 GB via memory card.
The Nokia 3310 comes with a 2 MP rear camera, which comes with a LED flash. The rear LED works as the torch and the flashlight too for the low-light images. The drawback of this phone is, this doesn’t come with a front camera for the selfies and video-calling.
The main highlight of this phone is 4G connectivity, which makes this phone much better than the other Nokia 3310 (Except the Legendary Nokia 3310). The new Nokia 3310 supports the 4G VoLTE, 3G, 2G. The company claims this will give you 12 Hours battery after 4G use.
The new feature phone comes with a Bluetooth 4.0 and FM Radio support too. The Nokia will reveal when this phone will be launched internationally in the Barcelona event, Mobile World Congress(MWC).
The 4G variant of Nokia 3310 is launched only in the lite Blue, and Dark blue color variants. The HMD Global launched Nokia 3310 3G in four color variants. The phone supports Wi-Fi, Wi-Fi hotspot, Bluetooth, Micro-USB etc. Let me tell one thing more, which can affect your priorities against this phone, the Nokia 3310 4G support only Single Sim the phone is not a dual-Sim phone.

Finally, Nokia 3310 4G is launched, but it will be launched internationally soon, but the dates are not decided. The Nokia 3310 4G launched with a good screen size with a decent resolution as the feature phone. The phone comes with 512 MB ROM, which is good to install Apps and Games on this phone.
The phone comes with a 2 MP rear camera with flash which is OK, but there is no front camera which is a heavy drawback of this phone. The phone is 4G and supports the HD voice calling too, but you won’t be able to make video-calls in this phone.
This time Nokia 3310 really comes with decent specifications and features, like Wi-Fi, Wi-Fi hotspot, VoLTE etc. The Nokia is always a good option in terms of phones, and this phone looks good too because we both know that this comes with best build quality. The phone is getting a pick, but it will be decided that it is worth to buy or not, after knowing the price and availability of this phone.